Gallivanting into the Rainforest
-JD Dorfman

The cobblestone streets and historic buildings are cool but I need a bit more adrenaline. I was on the hunt for something different to do in Paraty.

There are jeeps parked along the streets with signs advertising tours of local waterfalls, a natural rock water slide and other harder to reach attractions of the area for R$60-70. I was in no hurry so I was holding out for a piece of valuable information or a hookup that could enhance my excursion before booking. I told the owner of my pousada that I was interested in getting a guide and the next day she introduced me to Robert.

I explained to Robert that I wanted to do some cool stuff and was not looking to sit in a car and take pictures. Robert explained that he grew up in the area, owned his own jeep, was an experienced guide and promised a great experience into the rainforest.

Pro Tip: A good guide understands that each person and each group is very different, they want you to have a great experience and if you help let them know what they can do to do that, they generally will (A tip doesn’t hurt).

My water bottles filled and my day bag packed, Robert picked us up from our pousada in a old-school bad ass jeep.We picked up  the remaining 4 people before heading up the mountain and into the Atlantic Rainforest.

Less than an hour drive up the Bocaino Mountains (Serra da Bocainathe)  we had arrived at our first stop. The rough, steep roads mixed with muddy conditions had me very thankful we had the 4-wheel drive vehicle, trying to save a couple bucks and doing this without the guide may have turned this into a real long day.

An easy 10 min walk from the jeep revealed a gorgeous waterfall along with dozens of meters of river flowing over rocks with a bridge suspended in the middle. A cool little hidden spot that had a bar and small restaurant along with a deep pool area to swim… I decided to jump off some stuff.

We spent about an hour playing before grabbing our stuff and following the river down stream. The next area can only be described as a worrisome mothers worst nightmare. Toboga Falls, a natural water slide of about 60 ft.

Every December they hold a championship where local judges determine the champion. Count me in next December.

Somehow, everyone survived a couple of trips down the slide with nothing more than a couple scratches and raspberries.

After a quick stop for lunch, buffet by the kilo (a detailed explanation of buffet livre vs. buffet by the kilo is coming soon),  we loaded up the jeep and continued to what was supposed to be our last stop before ending the day at a cachaça distillery.

The path from the jeep was an experience in itself, the river to the left and the canopy above leading to a bend of the river surrounded on 3 sides by steep cliffs, Tarzan Falls. 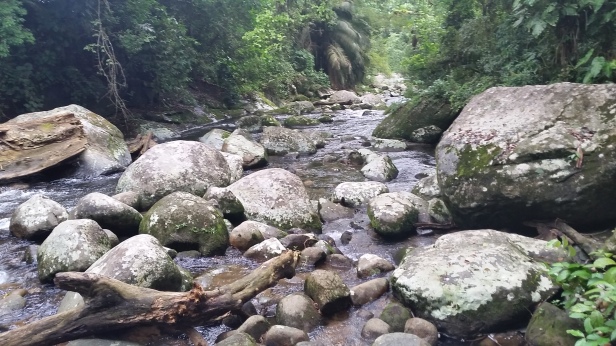 There was a rope swing on one side and a small trail leading up a steep cliff on the other. Our guide told us that this challenging little trail leads to an opportunity to jump off a gnarly place, no one wanted to do it…I had to at least give it a look.

There is also some cool, remote areas to explore. 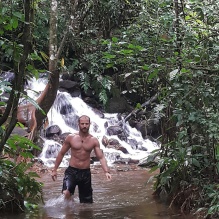 Right as we where wrapping up the day… one of the tour participants, who had avoided trying much of the more challenging task throughout the day, decided that she would give the rope swing a shot. The rope swing came with very simple instructions….. Hold on and go all the way forward, swing all the way back and drop down into the middle of the water. Apparently there was a communication error at some point and our Tarzan-et (Jane?) decided to let go as the rope hit its peak in upward momentum – slamming herself right into the side of one of those steep cliff rock faces mentioned before. 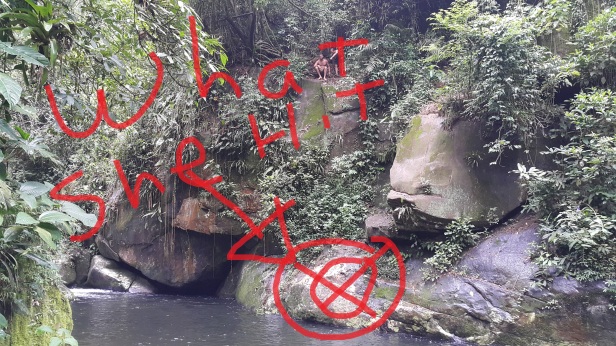 Well this ended the day pretty quickly, there would be no cachaça distillery. My off-duty status became temporary duty as we dove in and retrieved her from the water. With a small stroke of good fortune she had managed to get her arm up to make first contact with the wall, instead of her head. The cut on her arm was bad, you could see bone, it was time to get to a hospital. We did some basic field aid and loaded her into the jeep. I can’t begin to tell you how mad I am that this was the one thing no one got on video. After we assured she was stable and were in route to the nearest hospital, I asked “Who had it on video?”. When no one said they did, I was a bit devastated.

Besides our travel companions mishap the day was great. To make it to Paraty and not get a chance to visit Serra da Bocainathe would be a missed opportunity, it was a hell of an adventure getting to explore and play in a little bit of the Atlantic Rainforest.

(Coming Soon: My experience at a Paraty Hospital)

Let me that the injury was ZERO fault to Robert. Robert took every precaution with everything we did to insure we knew the risks and we were prepared to handle each challenge as it should be tackled. The accident occurred because of someone not listening to instructions and performing the challenge incorrect. Always know your limitations and always make sure to listen careful and focus when you are doing anything that involves risk.